Startup Review: Shopular or How to Enjoy Your shopping!

In the perspective of always trying to discover all the hidden secrets that are going on in the economy and we are not always aware of. I decided to start posting a weekly analysis of a startup. (I will try to make it two startups per week if it’s possible or even more since summer is going to be the right time for me to keep publishing as much as possible).

The startup of  the day is Shopular. This is a startup that promise to make your shopping a way more enjoyable. To simplify all the process that you go through to do your shopping.

Shopular, What is it exactly?

When you want to do some shopping, you tend to look for as much coupons and deals that you can find first. Which is a very nice idea, especially in all the hard economical situation where we are.So you look for as much as you can but doing some research in Google ( or some other search engines, it depends on you). Sign in as many websites that you found that deliver coupons, and then just keep checking your emails to find the right coupon  that will fit you. But you usually that way, it’s nice only the first few days. Your inbox will quickly get overwhelmed by thousands and thousands of emails. They are not fake offers sure, but there are too many, and it’s hard to find the right ones that fit you. And here is where comes Shopular concept.

Shopular is a mobile app available in both google play and also the app store.The Shopular  founders believe that smartphones can be used the right way to help us in doing shopping. The push notifications can become too useful when it will tell you that there is a coupon of XX% of reduction for your favorite brand. 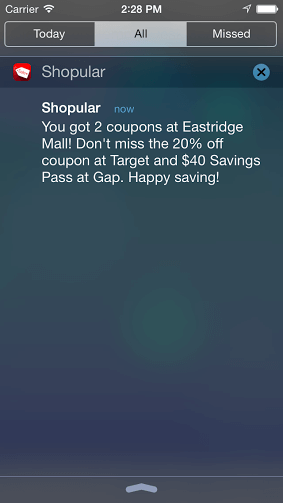 To get a notification about a discount on a brand you like… That’s great!

Shopular comes with a very fluid and responsive layout, add the fact that you can customize the options in it and make them depends on your favorites brands that you would love to shop. That way you are exploiting 100% of the potential of the app to get shop what you like at the best prices. 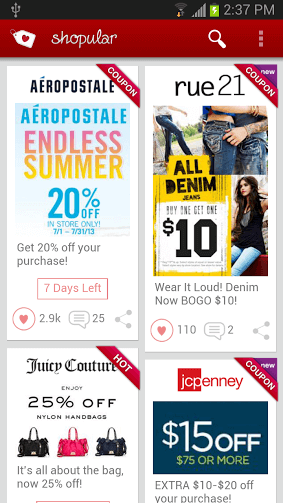 example of the Shopular home page 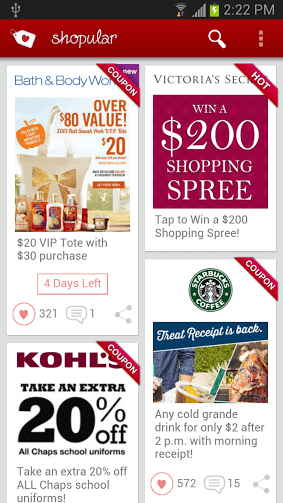 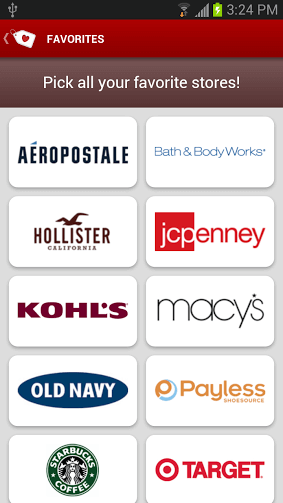 It also works with geolocalisation, so always think to check the app when you get to any mall. It will give coupons and deal for the closest stores to you. 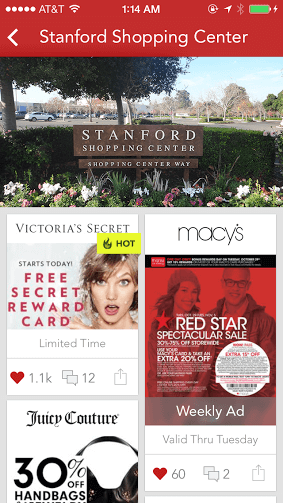 shopular deals due to geolocalisation

Shopular also includes social features.It gives consumers the ability to comment on deals within the app. So their remarks and review will appear below the coupon commented. According to a member of the Shopular team  on average  70% of  deals get commented on, that’s mean that the community loves to talk about deals, share tips & tricks about them and exchange shopping fun right in the app. Shopular will certainly try to always keep improving its social features. We are all social, and if the social platform is great it will be a great launching pad to get more buzz and so more customers. 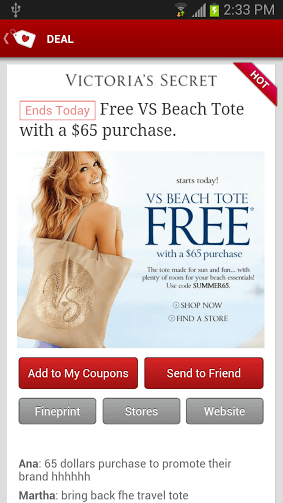 A deal of VS and people interacting on it.

Shopular average rating through both the app store and google play is between 4.6 and 5.0.

The app is updated in a daily basis, so it’s always good to check it.

What about the company?

Well, concerning the Shopular company it was founded in 2012 and they are based in Redwood City in Californie. Concerning their performance, I think that they are doing quite well. They already raised more than $6 Million through investments. The principal actual investors are  Sequoia Capital, Y Combinator, and Adam D’Angelo.

A little briefing about these three before to go further:

Shopular was, as they said, founded to delight  shoppers and to bridge between the shoppers and the brands they love. The Shopular team count already 18 members. They growing slowly but surely, and since the whole point of Shopular is to make the life of consumers simpler and better, I personally  think  the is potential for them to grow fast and soon. Just from 2012 to now they already have made some millions of happy shoppers.

It’s not going to be easy to win against all those, but this is all that every Entrepreneur adventure is about, I hope for the Shopular team that they have the right attitudes to deal with the situation and always keep evolving.

How does Shopular  can make money?

I think that Shopular  will simply negotiate some affiliate contracts with all the stores that it shows coupons and deals of. Added to ads for these same stores.

Also, I found that Shopular charge a little fee for each coupon impression or redemption.

That’s the ways they use (or can use if it’s not already the case) to make Shopify a profitable business. 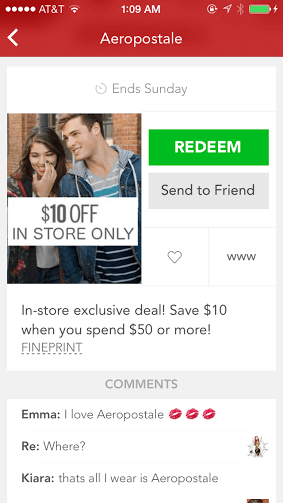 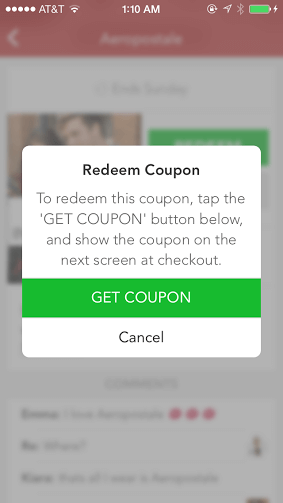 That’s simply how to redeem in Shopular

That’s it. That was my first review on a Startup, and I plan to do more of course. If there are some details that you think I should have treated and I missed feel free to tell me about it in the comments and if you have already tried Shopular share with us your experience with  it.