Turkish Economy after the big mess of the Turkish Elections

Turkey, a country rich in history and with a fully diversified cultures, which is located between Asia and Europa. This country is one of the bridges between this two continent since it’s located in the crossroads between them. Which makes it a country of significant geostrategic importance. Turkey is also a very beautiful country. Istanbul: the largest city in Turkey and it’s economic capital is also its touristic capital and the principal destination for anyone that goes to Turkey. It’s one of the most beautiful  cities in the world and it’s ranked the number 3 in TripAdvisor annual ranking of top destinations. The earning from the touristic sector has made more than 34 billion in 2013, according to the WorldBank.  And there is a lot to say about this magnificent country, but that’s not the topic of the day. So let’s focus on our subject.

Just some days ago, there were the Turkish elections. The results have been pronounced by the end of Sunday 7th June and were like that: 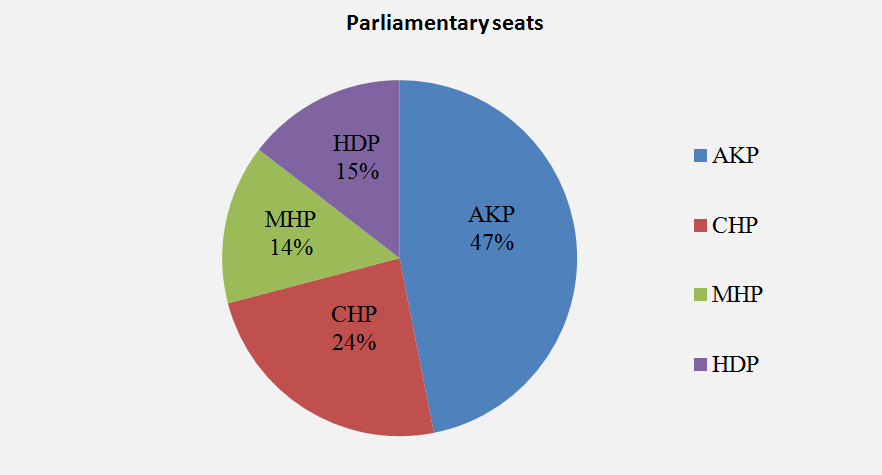 Results of The Turkish Parliamentary Elections

What do those results really mean? What do they mean specifically for the Economy? For the Turkish economy? What may happen and how they should act?

Let’s analyse all of that my friends:

First, What led the AKP to lose their absolute Majority?

The AKP (Justice and Development  party) has been founded by Recep Tayyip Erdogan. This man is certainly the most formidable vote-winner that Turkey has ever seen. He  founded the AKP and led it to three absolute parliamentary majorities as prime minister. Then, last year he performed a greater performance by becoming the first president directly elected.

But the AKP has lost a lot of their lover, especially after all the events that has happened the last few years.  Like the Taksim square protestations, which were handled in a very bad way. ( Never treat peaceful protestant in a violent way).Protestant were just against a project  of urban redevelopment, but the citizens always saw the Gezi Park & Taksim square as an essential part of their city. You can’t take it off without the agreement of the citizens. Add to that some  corruption cases inquiry which were revelated  and sparked feud between Erdogan and erstwhile ally, US-based Islamic cleric Fethullah Gulen. And Finally, the way the government has prohibited many times some social media like Twitter and Youtube. And that move is just an attack to the liberties of expression. 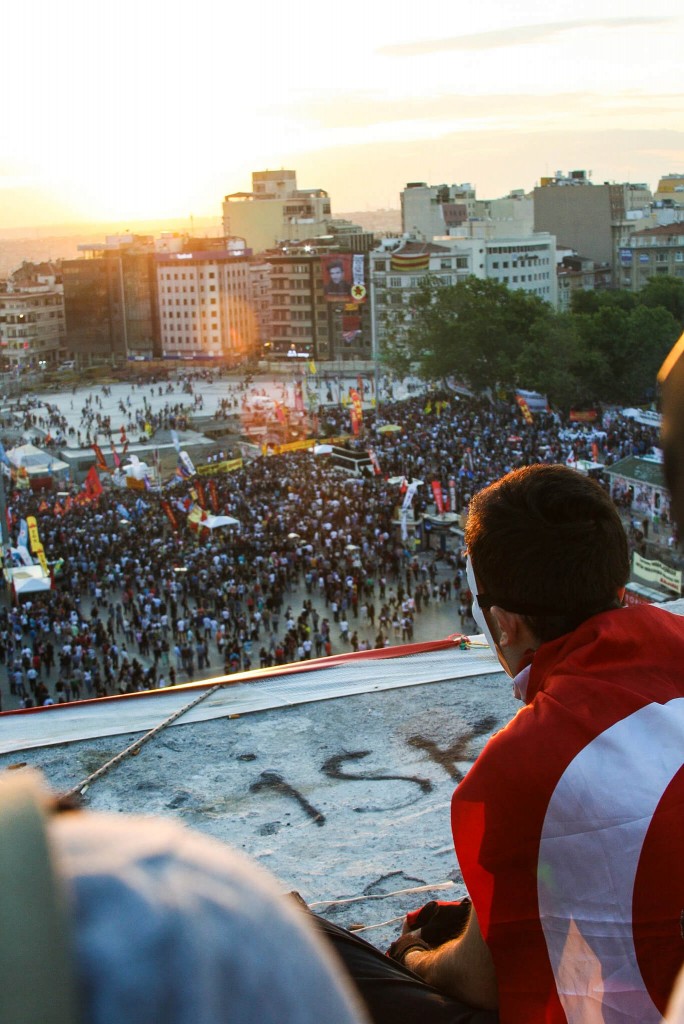 A Turkish looking at the Taksim/Gezi Park protestations

Now let’s see the impact that has been made after the results of the elections:

Here are the  first consequences of those results:

The Borsa Istanbul, which is their market were are exchanged stocks, gold and also derivatives was in the red flag the day after the results, Monday, with a loss of 5%. All the stocks were in the red, except some stocks of companies that has been always hostile to the AKP. (like the Bank Asya +10% which is a bank set by some of the followers of  Fethullah Gülen, one of the enemies of Recep Tayyip Erdoğan). 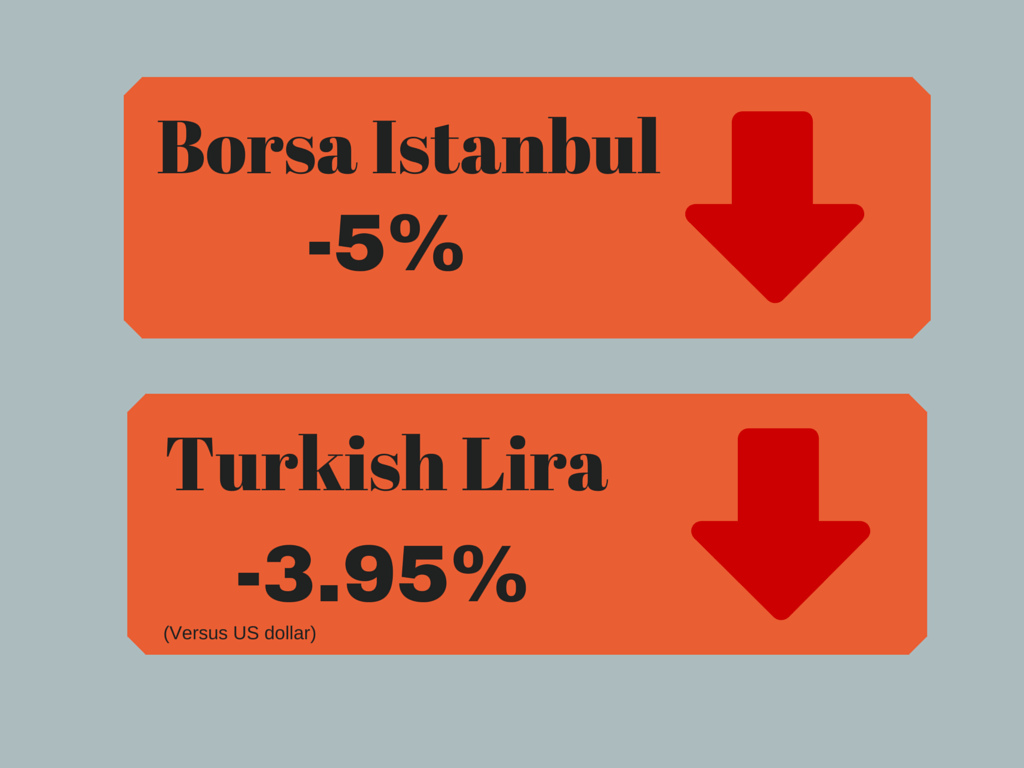 And the fact that the Lira has kept losing its value, and loosed in Monday 3.95 % ( versus the US dollars ). Takes it to a loss from the beginning of the year of more than 15%. And that’s a major problem! Let me make it clearer and easy to understand for you. The Lira is the local  currency of Turkey, some companies that are established in Turkey, buy some goods ( equipment, raw materials, etc) from out of Turkey. So they buy it from the USA, or the EURO, or any other worldwide source. If it’s the Euro the payments has to be done in euro €, but for all the rest they will use the worldwide  actual currency which is US dollars $. So  companies that have debt in the dollar will face major difficulties to pay back their debt since the more the value of the Lira goes down, the more their whole wealth  will go down too.

the Gross Domestic Product just by itself isn’t enough to give a conclusion, so let’s see some other indicators:

The major problems that the Turkish Economy is facing:

Let’s see the growth of the GDP: 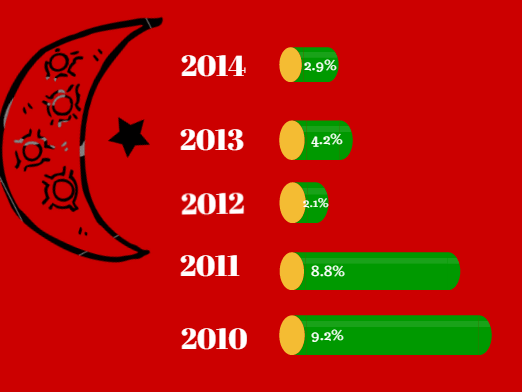 As we see, it was going nicely  the first years  (even with the crisis of 2008) but  it fell in 2012 ( and that’s what the real bad effects of the crisis ). Everybody thought that things are going to get better, and by 2013 it was the beginning of the recovery, but it wasn’t. The GDP growth of 2014 ( 2.9% only ) shows that the Turkish Economy is still struggling and facing big problems and challenges.

And that’s not the end of the story, unemployment has reached a new record after the one of 2009 ( 13% ). The actual rate of unemployment is 10%. And it’s may still keep going further  if there is no big decisions and initiative taken from the government. 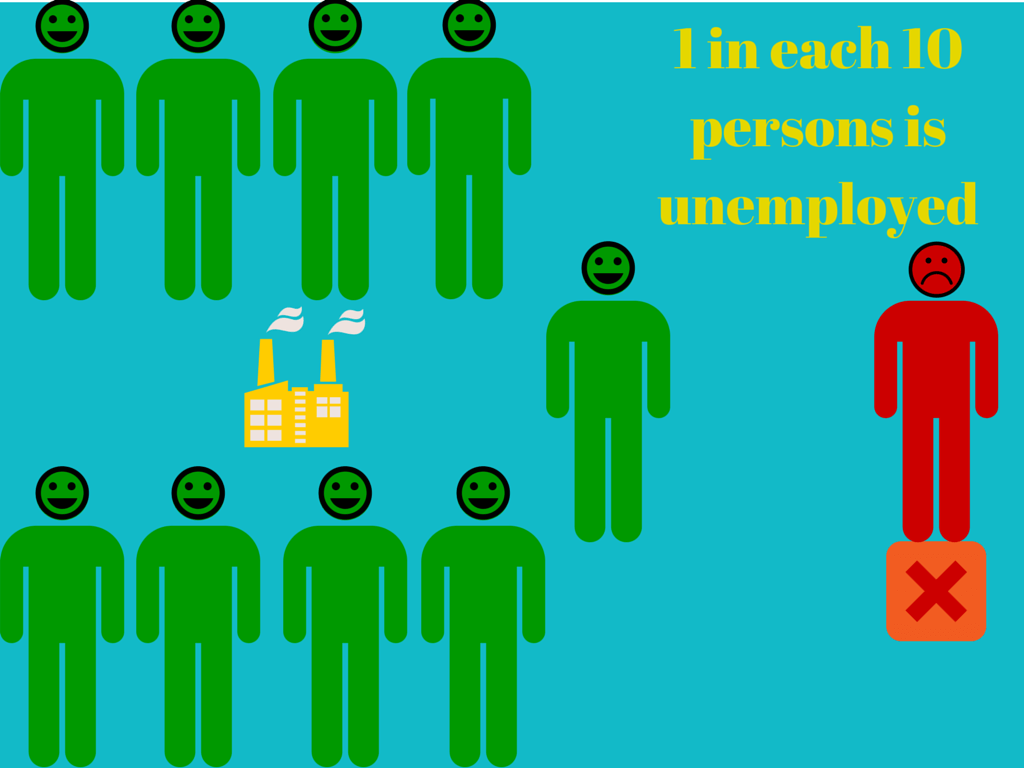 Unemployment in the Turkish Economy – 1/10 is unemployed

The geopolitical situation doesn’t help too. With all the problems that are happening in the region ( Syria, Iraq, etc).Investors  are less interested  and reticent to make any investment in the region since the possibility of losing everything is not to neglect.

Add to that, that the Turkish Economy relies on external Investments. Last year, the external debt  was 5.9% of the GDP. It’s fine and can be handled, only if investors keep bringing money to the Turkish markets. 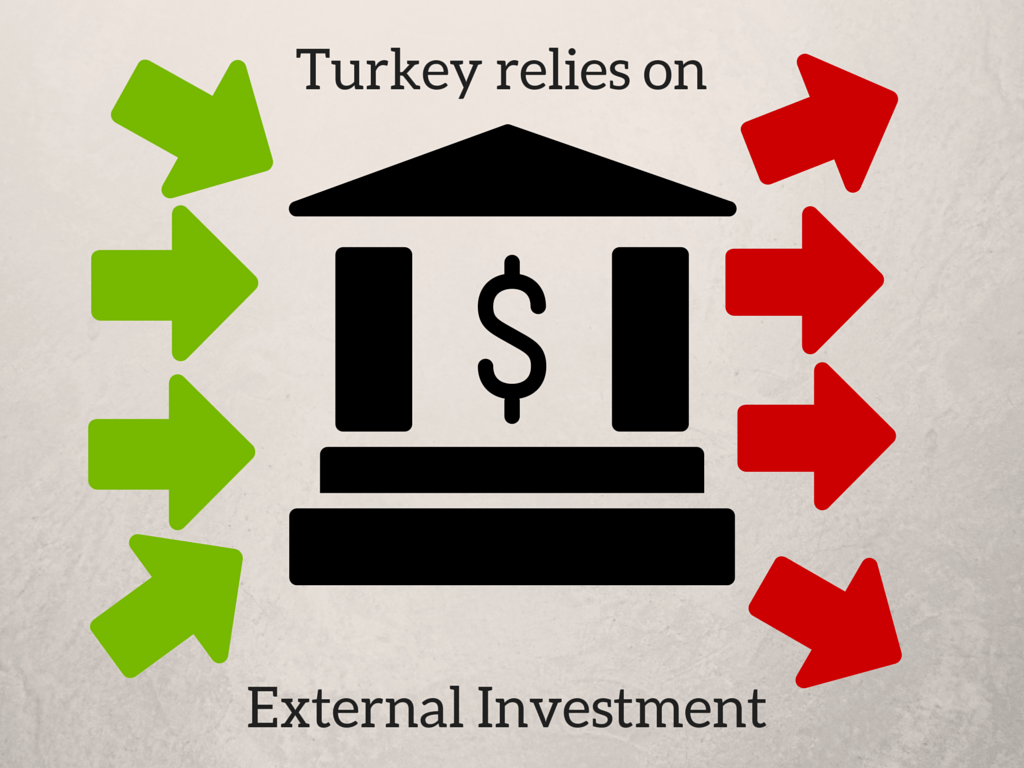 But it’s totally not going to be easy because added to all the facts mentioned before that can make investors reticent to put any money in the Turkish Economy. The FED ( Federal Reserve System of the United States, in other words the central Bank of USA ) have recently raised their  interest rates, which can make American assets a way more attractive than the Turkish ones for investors. 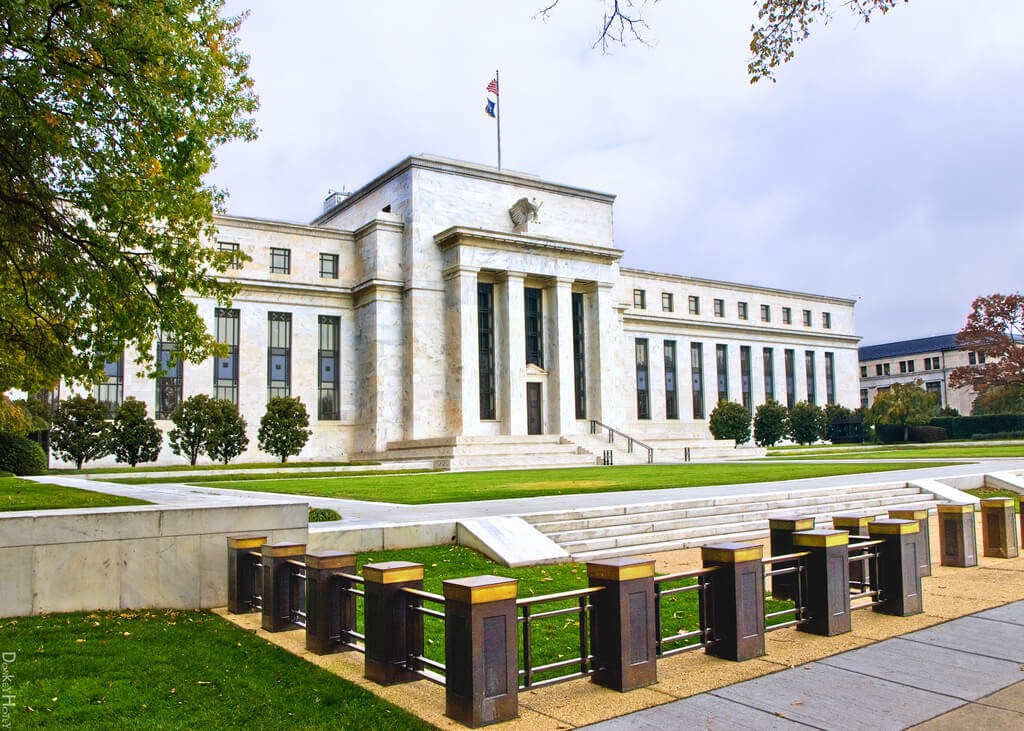 And, like if it’s not enough problems already. There is actually no party who is interested in having a coalition with the AKP. Seems like everyone just want to be in their oppositions.

To conclude about the Turkish Economy situation

Turkey is seen as an unattractive market already cause of the slow economic growth, high levels of debt and the reliance on external financing. If we add to that  political instability investors will just run away from Turkey. The Turkish economy will  be in a very bad situation.

Stability in Turkey is possible only with one party ruling the country. The Coalition has failed all over the history of Modern Turkey ( especially economically, since that’s the important point for us ). And we saw that it’s only when the country was ruled by one party, that its economic situation has been developed in a good way. The GDP of Turkey development over the years, show how much the unity  of a government ruled by one political party with a parliament where they have the majority, has led Turkey to the recent good economy that they have.

The actual Prime Minister, and leader of AKP: Ahmet Davutoğlu, have less than 45 days, to form a coalition with other political parties (just one is enough) and form a new government. If it happens that he would not be able to do so, the only alternative that Turkey will have will be  to have some anticipated elections. With the hope that there will be a party then who will have the absolute majority, to  rule without a coalition.(that scenario is actually unlikely  to happen, I think that a coalition will be made, but, unfortunately,  it will not be as efficient as the unique party government).

I wish all the best for Turkey and their Economy, and I disclaim that this post has been made to say bad things about Turkey. I discussed the subject just for a matter of economic analysis and to share as much information as possible. If you have anything to discuss or share with me concerning the Turkish Economy feel free to say it in the comments below.

Update August 2015: Finally they couldn’t reach an agreement as expected. Turkey is going to have anticipated elections. We wish them the best of luck to go through this hard situation.