Barbara Corcoran: Or How To Go From $1000 To Millions?

Barbara Corcoran is an American Business Woman,  investor, speaker, author, and a TV personality.  Most of the people that know her from TV know her from the TV show the Shark Tank. Where she is a member of the jury with Mark Cuban, Robert Herjavec, Daymond John, Lori Greiner and Kevin O’Leary.

Barbara Corcoran  as she is in the Shark Thank jury, she is successful too like all the members of it.  Her actual Net Worth is $80 million. And her success story is quite amazing too. With her own ups and down, but as all successful entrepreneurs. Tenacity and hard work are an essential part of the path to success.

Barbara Corcoran was born in 10th March 1949 in Edgewater, New Jersey. She studied at Saint Thomas Aquinas college and graduated from it in 1971. With a degree in Education, she taught school for a year. But  soon got bored of it. She did not feel that this is the right job for her.

So Barbara Corcoran moved and went over 22 jobs before she got sick of being the employee of someone, of having a boss. She wanted to be her own boss. Between all the 22 jobs she had there were one consisting of renting apartments in New york City. By the time she decided to be her own boss, she chose real estate. She already had some experience in it (through the renting job), but it was going the first time ever she was  going to start selling real estate. She decided to be the best agent, to have the greatest company of real estate in New york. By 1973, it was the date of a challenge, the birth of her company “The Corcoran Group” and mostly the beginning of her success story.

The business Adventure of Barbara Corcoran

After than Barbara Corcoran was sick of having bosses and decided to be her own boss. She co-founded “The Corcoran Group” with her boyfriend at that time. Who was rich enough to land her 1000$ ( according to the inflation rate it’s approximately $5,300). So Barbara Corcoran started here own business of real estate. 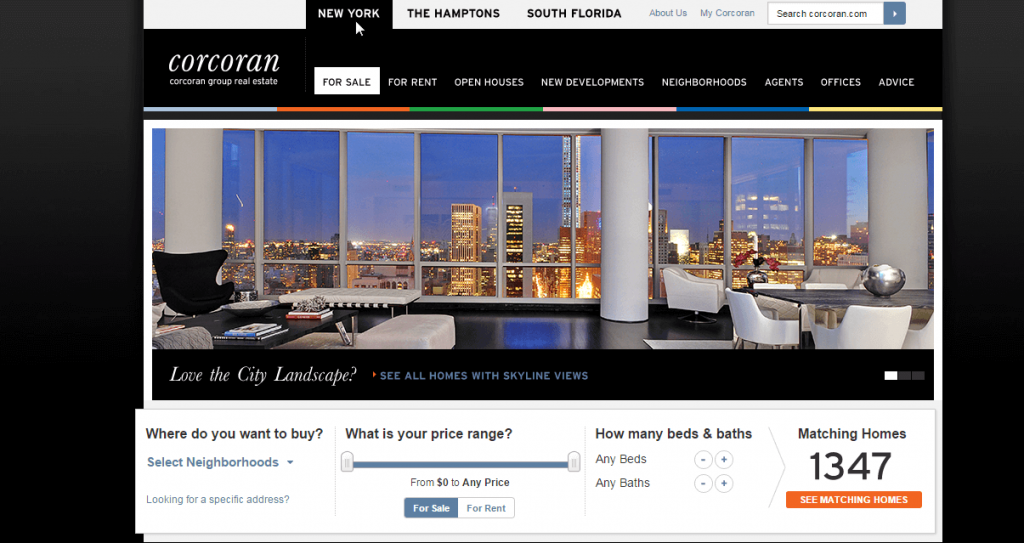 How the Corcoran group is these days…

Back at that time, Barbara Corcoran wasn’t even a legitimate broker. To start the business, she borrowed a real estate license from a “shady attorney”. She kept running the business with that fake license for more than a year and a half. Not because she liked the adventure of being a fraud, but because you have to be an agent for an amount of time before then you be able to postulate to pass the test. She didn’t succeed at the test from the first time. Not even the second one. And yet not the third one. She failed three times before she get that license to be legitimate. So it took her another added year to get that license and get her name on the wall as we say.

After 7 years of running the business with her boyfriend. Barbara Corcoran received bad news from him. He decided to marry the secretary of the agency and leave everything. Barbara included. He broke her heart and told her as a goodbye: “You know, you will never succeed without me”. Knowing that, instead of freaking out, she just got over motivated. Barbara Corcoran says:”I knew when he said that, I would rather die than let you see me not succeed.”

The business of Real estates that Barbara Corcoran  founded became one of the most successful ones. But it wasn’t easy at all. She went through many hard times. In 1986, she was $360,000 in debt and had 18 salespeople on her books. One of the employees of her business insisted her too much to do some advertising. The market was in a recession. There are not a lot of consumers out there, and to make it more difficult the company wasn’t well known. Advertising was a must. But Barbara Corcoran was already in debt and hadn’t any money to do it. She was stuck facing an irresolvable problem.

After thinking about the problem for a while, she came up with a brilliant idea to get some free advertising. She used her expertise. More than that she definitely established herself as an expert in the field. What has she done? She calculated the average sale price of 11 property units that The Corcoran Group has sold that year. She typed up a document with only that statistic and labeled it:“The Corcoran Report”. She added a fancy tagline to it  to indicate that the report covers “conditions and trends in the New York City housing market.” Then she mailed it to every writer and reporter of The New York Times. Business reporters, sports… All of them!

A week after that, the Times ran a story  on New York City apartment prices crossing a new low level never seen before. And they had put in the first line: “According to Barbara Corcoran of The Corcoran Group”.

It was a huge success! She kept writing these reports and publishing them  in a monthly basis. As much as she kept doing them, as much she got attention from medias. The attention that she got  established her as “a specialist”, “an expert” in the real estate business. And cause she became considered as an expert, it automatically put her brand under the lights. She led her brand to a whole new level and with a very restricted amount of money.

Also the fact of being quoted on many big authority medias like  the “Wall street Journal” or “The Times” led people to assume how big she is. In fact, people assumed bigger than what she is in reality. And that put more pressure on her to work hard and assume being an expert. A leader of the best Real estate agency.

“The Corcoran Group” kept improving and evolving and became the biggest business of real estates in New York. Once Barbara Corcoran achieved her primary goal. She had to decide either to keep pushing and put her business to another new level. Or to choose to spend more time with her child. She picked her son and by the year of 2001 she sold her business for $66 million.

A business that started only with  $1000 ended by getting $66,000,000.00. That’s a gainful investment. That’s an AMAZING investment. And concerning what her boyfriend told her at the beginning of her journey, she only says: “Thank God for the gift of the insult.”.

Even with a broken heart. Without experience. With a huge numbers of fails. With a very low budget. Barbara Corcoran challenged the world and made a fantastic adventure, full of surprises and risks, that led her to the successful business woman she is now.

What about you? What’s your excuse to don’t succeed?